In the given article, we have discussed the various types of rocks of earth, how they are formed, their characteristics and further classification so that one can understand other related concepts well.

1. Classification of Rocks of Earth:

The material of the crust of the earth is generally called rock. They can be of different colours, sizes and textures.

The rocks are classified based on their origin. The types of rocks are mentioned below:

They are formed by the sediment and debris accumulated over long periods. The sediments are derived from the older rocks, plants and animals. Geological processes that lead to the formation of sedimentary rocks are erosion, weathering, dissolution, precipitation and lithification. Ganga-Brahmaputra delta is a good example of sedimentary accumulation.

Sedimentary rocks are classified based on the nature of sediments as:

They are formed under the influence of heat or pressure on sedimentary or igneous rocks. Heat and pressure change the colour, hardness, structure, and composition of the pre-existing rocks. Heat, Compression and Solution (Chemically active hot gases and water) are the agents of metamorphism. The examples of metamorphic rocks are as follows:

Igneous rocks can be classified as:

Igneous rocks can be also classified into acidic and basic rocks:

What is Rock Cycle? 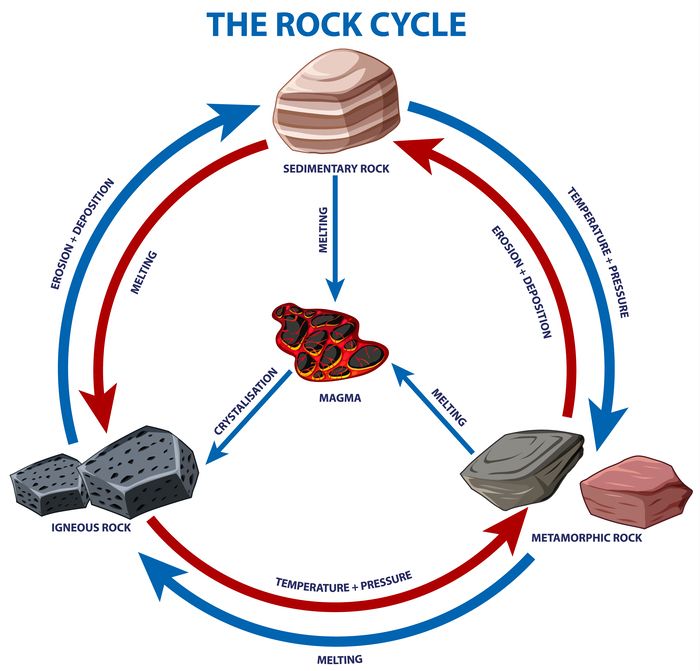 Rock Cycle: Transformation of one rock into another

Which rocks have layered structures and are known as stratified rocks?

Sedimentary Rocks have layered structures and are known as stratified rocks.

Gneiss, Marble, Slate and Quartzite are examples of which type of rock?

Gneiss, Marble, Slate and Quartzite are examples of Metamorphic rocks.

What is the other name for Extrusive rocks?

Which rocks are formed by solidification and cooling of lava?

Igneous rocks are formed through solidification and cooling of lava.

Which type of rock is Limestone?

Limestone is a sedimentary rock.

Which is the most abundant element of the whole earth?

Iron is the most abundant element of the whole earth.

Which is the most abundant element of the earth’s crust?

Oxygen is the most abundant element of the earth’s crust.