The basic understanding of the structure of Earth will help one learn other concepts well like earthquakes, plate tectonic theory, volcanoes, landforms, etc. In this study material, many important facts about Earth's interior are discussed. The structure of the Earth, layers in Earth interior, etc. are given below:

1. Interior of the Earth

Earth has been formed about 4500 million years ago. Its radius is 6371 km. What’s inside the earth can be known through the information obtained through direct observations and analysis of materials. There are two sources of information: Direct and Indirect Sources.

Indirect Sources: Analysis of the rate of change of temperature and pressure from the surface to interior of the earth, Meteors, Gravitation, Magnetic field and Seismic activity (Shadow zones of Primary and Secondary waves) 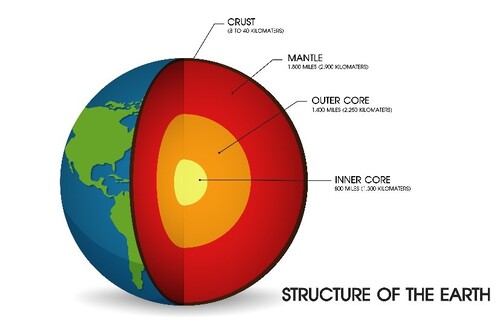 The interior structure of the earth is divided into three layers. These are as follows:

It is the outermost layer of the earth. It is the thinnest of all layers of earth. It is brittle in nature. The crust is divided into plates that float on the mantle. It is made up of different types of solid rocks and minerals. It constitutes only 1% of the entire volume of the Earth. Its average thickness is 30 km. 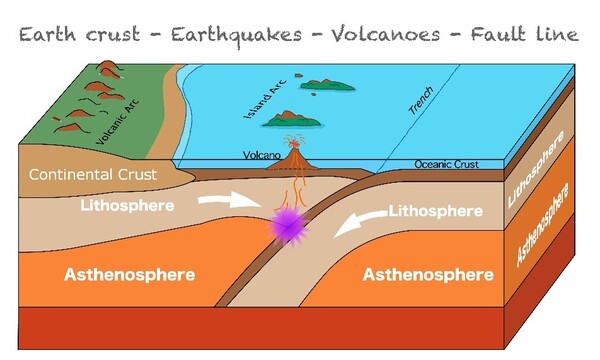 The Conrad discontinuity is the boundary between the hydrosphere and crust.

The Mohorovicic discontinuity is the boundary between the crust and the mantle. This is a depth where seismic waves change velocity.

The lithosphere is made up of the crust and the uppermost part of the mantle. 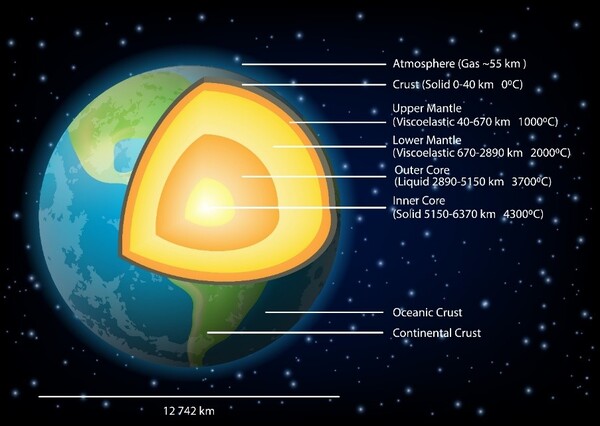 Continental Crust: mean thickness: around 30 km, called sial as made up of silica (si) and alumina (al).

Oceanic Crust: mean thickness: 5 km, called sima as made up of silica (si) and magnesium (ma).

Core: Earth’s innermost and densest layer, called nife as mainly made up of nickel (ni) and iron (fe), discovered by R.D. Oldham.

Pyrosphere: located between lithosphere and barysphere, zone of igneous activity and lava formation

Baryshpere: innermost zone of the interior of the earth

Frequently Asked Questions (FAQs) about Interior of the Earth

Which layer of Earth is the thinnest of all layers of earth?

Crust is the thinnest of all layers of earth.

How much percentage of the entire volume of the Earth is made up of crust?

1% of the entire volume of the Earth is made up of crust.

Which layer is mainly made up of silica and alumina and called sial?

Continental crust is mainly made up of silica and alumina and is called sial.

What is the name of boundary between the crust and the mantle?

The boundary between the crust and the mantle is called Mohorovicic discontinuity.

Which layer of internal structure of Earth is known as nife?

Core is known as nife.

Which layer of Earth makes up 84 percent of the volume of the earth?

Mantle makes up 84 percent of the volume of the earth.

What is Lithosphere made up of?

Lithosphere is made up of the crust and uppermost part of Mantle.

Name the layer located between lithosphere and barysphere.

Pyrosphere is located between lithosphere and barysphere.