The Himalayan Ranges and their Importance

1. Basic introduction about the Himalayas

The Himalayas not only form a physical barrier between the Indian subcontinent and the Central and East Asian countries but also a climatic, drainage and cultural divide.

The Himalayas are young and fold mountains. They are spread over a distance of nearly 2400 km and form an arc. Their width varies from 400 Km in Kashmir to 150 Km in Arunachal Pradesh. The altitudinal variation is greater in the eastern half in comparison to the western half.

2. Longitudinal divisions of the Himalayas

The Himalayas are made up of three parallel mountain ranges- Greater Himalayas, Middle Himalayas and Shiwaliks. These are described below: 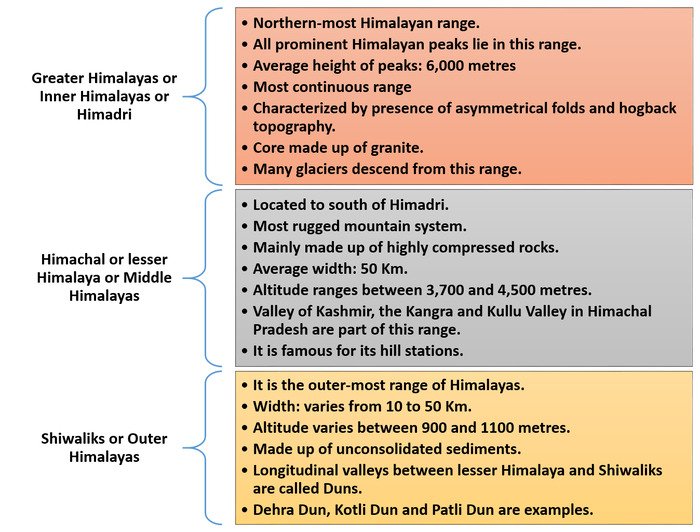 4. Regional divisions of the Himalayas

5. The Purvachal or the Eastern hills and mountains

6. Five subdivisions of the Himalayas

The Himalayas can also be divided into five subdivisions listed and described below.

The northeastern section of Kashmir Himalayas is a cold desert located between Greater Himalayas and Karakoram ranges. Longitudinal valleys in the southeastern part of this region are called duns. For example, Jammu dun and Pathankot dun.

Glaciers in Kashmir or Northwestern Himalayas: Baltoro and Siachen glacier

Passes of Kashmir or Northwestern Himalayas: Zoji La on the Great Himalayas, Banihal on the Pir Panjal, Photu La on the Zaskar, Khardung La on the Ladakh range

Lakes of Kashmir or Northwestern Himalayas: Fresh lakes like Dal and Wular and saltwater lakes like Pangong Tso and Tso Moriri.

All three ranges of Himalayas (the Great Himalayan range, the Lesser Himalayas and the Shiwalik range) are prominent in this part. The Lesser Himalayas is locally known as Dhauladhar in Himachal Pradesh and Nagtibha in Uttarakhand. ‘Valley of flowers’ is also located in this region.

This part of the Himalayas is famous for its fast-flowing rivers like Tista. Lepcha tribes inhabit higher reaches of this region. Darjeeling and Sikkim Himalayas are famous for scenic beauty, flora and fauna, particularly Orchids.

They spread from east of the Bhutan Himalayas to Diphu pass in the east. They are known for fast-flowing rivers, which form deep gorges. It has rugged topography.

6.5. The Eastern Hills and Mountains

These come under the Himalayan mountain system. These are low hills. Their local names are Patkai Bum, Naga Hills, Manipur hills in the north and Mizo or Lushai hills in the south. Barak is a river in Manipur and Mizoram. It is the tributary of Meghna. India’s largest natural freshwater lake, Loktak Lake, is located in Manipur. Mizoram is also called Molassis basin. It consists of soft unconsolidated deposits.

Greater or Inner Himalayas or the Himadri: Northern-most Himalayan range, World’s highest peak, Mt. Everest (known as Sagarmatha in Nepal), most continuous range and characterized by the presence of asymmetrical folds and hogback topography

Himachal or Lesser Himalayas or Middle Himalayas: Located to the south of Himadri, most rugged mountain system, Valley of Kashmir, the Kangra and Kullu Valley in Himachal Pradesh

Shiwalik or Outer Himalayas: Outer-most range of Himalayas, made up of unconsolidated sediments, Longitudinal valleys between lesser Himalaya and Shiwaliks are called Duns (Dehra Dun, Kotli Dun and Patli Dun).

The Purvachal or the Eastern hills and mountains are made up of Patkai hills, the Naga Hills, the Manipur hills and the Mizo hills.

Which is the northern most range of the Himalayas?

Greater or Inner Himalayas or the Himadri is the northernmost range of the Himalayas.

Which Himalayan range is the most rugged mountain system and mainly made up of highly compressed rocks?

What is the name of outer-most range of the Himalayas?

Shiwaliks is the name of outer-most range of the Himalayas.

World’s highest peak, Mt. Everest, is located in which range of Himalayas?

Mt. Everest is located in Greater or Inner Himalayas or the Himadri.

What is the name of part of Himalayas located between Satluj and Kali rivers?

Kumaon Himalayas is located between Satluj and Kali rivers.

Asymmetrical folds and hogback topography are characteristic features of which Himalayan range?

Asymmetrical folds and hogback topography are characteristic features of the Greater or Inner Himalayas or the Himadri.

What is the name of second-highest peak of Himalayas located in India?

Nanga Parbat is the second-highest peak of the Himalayas located in India.

Which crop is cultivated in Karewa formations found in Kashmir or Northwestern Himalayas?

What is the name of summer grasslands found in higher reaches of Himachal and Uttarakhand Himalayas?

Bugyals is the name of summer grasslands found in higher reaches of Himachal and Uttarakhand Himalayas.