In our day-to-day life, we often use units and dimensions in one or more ways, We go to the grocery store and ask for 1 kg potato. Have you ever wondered what is this kg? - If yes then we have got answers for you below.

Physics is a subject based on physical quantities. Therefore, one needs to clearly understand the basic concepts of Physics. One such concept is Units and Measurements. In this topic of Units and Dimensions, we have discussed the various types of units, systems of units, physical quantities, conversion of units and dimensional formulas.

Example:  To measure the quantity of milk it is compared with liter so liter is its unit.

Characteristics of a Standard Unit

A standard unit should have the following features:

The three types of units are as follows:

The Units used to represent the fundamental quantities are called Fundamental or base Units. These are basic units for measuring the physical quantities and don’t depend upon any other unit.

The units of physical quantities other than fundamental quantities are expressed by the combination of base units. A unit that is derived by combining fundamental units is called a Derived Unit.

Distance is a physical quantity measured in metres and Time is measured in seconds, therefore the derived unit for Speed is metre/second (m/s).

Metre (m): One metre is the length of the path travelled by light in vacuum during a time interval with duration of 1/299792458 of a second.

Kilogram (kg): Since 1889, it has been defined as the mass of a platinum-iridium lump that is kept in a secured vault in Paris. But with effect from May 2019, it is defined in terms of second and metre by taking the fixed numerical value of the Planck constant (h) to be 6.62607015x10-34.

Candela (cd): One Candela is the luminous intensity, in a given direction, of a source that emits monochromatic radiation of frequency 540 x 1012 Hz and has a radiant intensity in that direction of (1/683) W/sr.

Second (s): One second is equal to the duration of 9192631770 periods of the radiation corresponding to the transition between the two hyperfine levels of the unperturbed ground state of the Caesium-133 atom.

In this system, the unit of length, mass and time are foot, found and second respectively. It is also known as British system.

In this system, seven fundamental units are used for measurement. It was adopted in 1960 in the International conference of weight and measure. It is also known as metric system. It is the standard system followed for International trade and commerce. 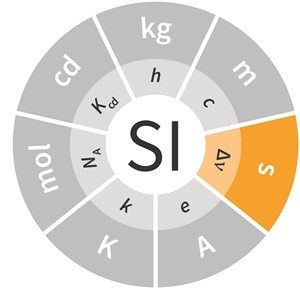 5. Physical Quantity based on Direction and Magnitude

A quantity that can be represented by a magnitude only is known as Scalar quantity. These physical quantities have no direction.

Examples of Scalar Quantity are:

A physical quantity that has both magnitude and direction is called Vector Quantity.

Similarly, other units can also be converted.

Physical quantity which doesn’t have any dimension are called dimensionless quantities.

8. Some Important Units and their value:

It is mainly of three types:

1. Fundamental Units: These are basic units. There are seven fundamental units.

Physical Quantity based on Direction and Magnitude

Dimension: Powers to which the fundamental quantities must be raised to represent it.

How many units are fundamental units?

There are seven fundamental units.

What is scalar quantity?

A quantity that has only its magnitude is known as Scalar Quantity.

Acceleration is a scalar or vector quantity?

Acceleration is a vector quantity.

What are Derived units?

Units that are derived by a combination of more than one fundamental units are called Derived Units.

What is the dimensional formula for Force?

What are the characteristics of a standard unit?

A standard unit should be of Convenient size, Well defined, Independent of Time and Place and should be accepted internationally.