Bihar is located in the eastern part of the country (between 83°-30' to 88°-00' longitude). It is an entirely land–locked state, although the outlet to the sea through the port of Kolkata is not too far away.

The climate in Bihar is a continental monsoon type of climate (Cwa) due to its great distance from the sea. The average temperature here is 27°C and the average rainfall in 975.86mm.

The factors affecting the climate of Bihar are:

The plains of Bihar consist of thick alluvial mantle. The soil is young and rejuvenated by continuous deposition of silt, clay and sand brought down by flowing rivers. The soil here lacks phosphoric acid, nitrogen and humus, but is rich in potash and lime. There are three major types of soil in Bihar:

There are many beautiful Lakes in Bihar, some of these are as follows:

According to Economic Survey of Bihar 2018-19, the growth rate of Bihar’s economy in 2017-18 was 11.3 percent, the highest among all the states in India. High development expenditure by the state government, without compromising on its financial discipline was the major factor behind this growth. The GSDP of Bihar in 2017-18 was Rs. 4,87,628 crore at current prices. At constant (2011- 12) prices, the figure stood at Rs. 3,61,504 crore.

As per these estimates, three most prosperous districts in Bihar are — Patna, Munger and Begusarai. On the other end, three most economically disadvantaged districts are — Madhepura, Supaul and Sheohar.

The cropping pattern, nearly unchanged over the years, reveals that Bihar is primarily a cereal economy, with more than 85 percent of its gross cropped area under cereals.

This growth in agro-based industries in Bihar (19.2 percent) was almost five times the growth rate achieved across all states of India (3.6 percent).

Under the Mukhyamantri Kosi Mulberry Scheme, 7 districts- Saharsa, Supaul, Madhepura, Araria, Kishanganj, Katihar and Purnea in the Kosi region were selected for promotion of mulberry production.

Kushal Yuva Program (KYP) is part of one of the ‘Saat Nishchay’ (Seven Resolves) of the state government — ‘Aarthik Hal, Yuvaon ko Bal’. This programme is targeted at all aspirants in the age group of 15-28 years, with age limit relaxed for SC/ST (33 years), OBC (31 years), Persons with disability (33 years).

Saat Nischaya or Seven Resolves of the Bihar government are:

The forest in Bihar covers 7.27% of the geographical area of the State.

Wildlife Species: The important Terrestrial species are Tiger, Leopard, Bear, Hyena, Bison, Chital, Barking Deer etc. Besides, there are many varieties of Crocodile, Magars and Fishes, Gangetic turtles in River systems. Freshwater Dolphin is found in the Ganga, Kosi, Gandak, Mahanada and Paimar rivers of the state.

Minor minerals like soil, sand and stone, and the major minerals of the state include granite, bauxite, quartzite, pyrite, mica and limestone are present in Bihar. Bihar is the principal holder of the country's pyrite resources and possesses 94% of resources.

The important minerals in Bihar are 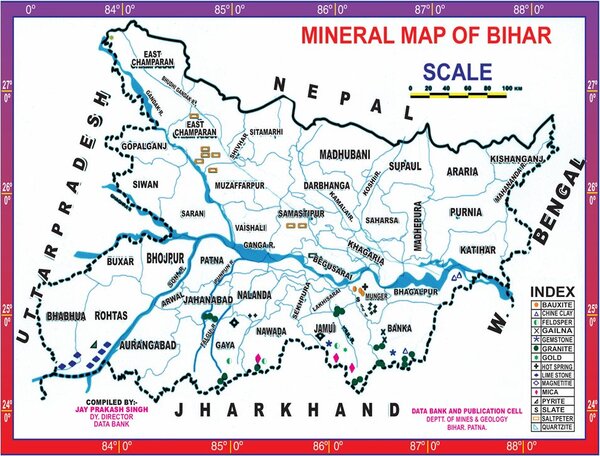 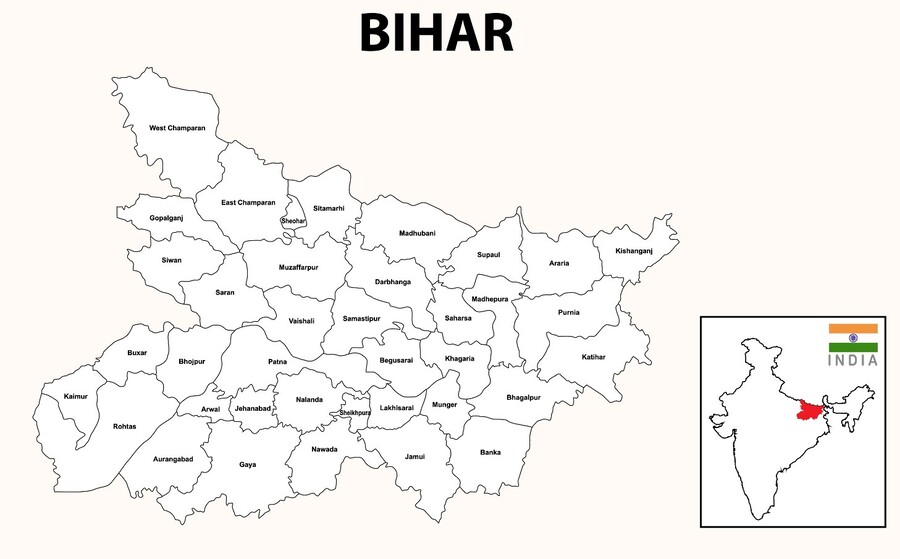 Who is the current governor of Bihar?

Phagu Chauhan is the current governor of Bihar.

Who is the current Chief Minister of Bihar?

Nitish Kumar is the current Chief Minister of Bihar.

Which is the state flower of Bihar?

The state flower of Bihar is Kachnar.

Which is the state animal of Bihar?

The state animal of Bihar is Gaur (Mithun).

What is the capital of Bihar?

The capital of Bihar is Patna.