The period between AD 750 and AD 1200 is known as the early medieval period of Indian History. Earlier, it was called the ‘dark phase’ of Indian History due to numerous fights between regional states. The recent studies show that though India was politically divided, it witnessed remarkable growth in the field of art, literature and language.

During this period, Kannauj became more significant and Pataliputra lost its importance as a sign of the sovereignty of India. There was complete decentralization that led to Indian feudalism. The political unity of India broke down due to the emergence of many regional powers who were waging continuous wars against each other.

Tripartite Struggle was an armed conflict between Palas of East, Gurjara Pratiharas of North and Rashtrakutas of South India. These powers were fighting with each other to set up their control on the Gangetic region in northern India.

The main objective of the conflict was to possess the Kannauj city, then a symbol of sovereignty. 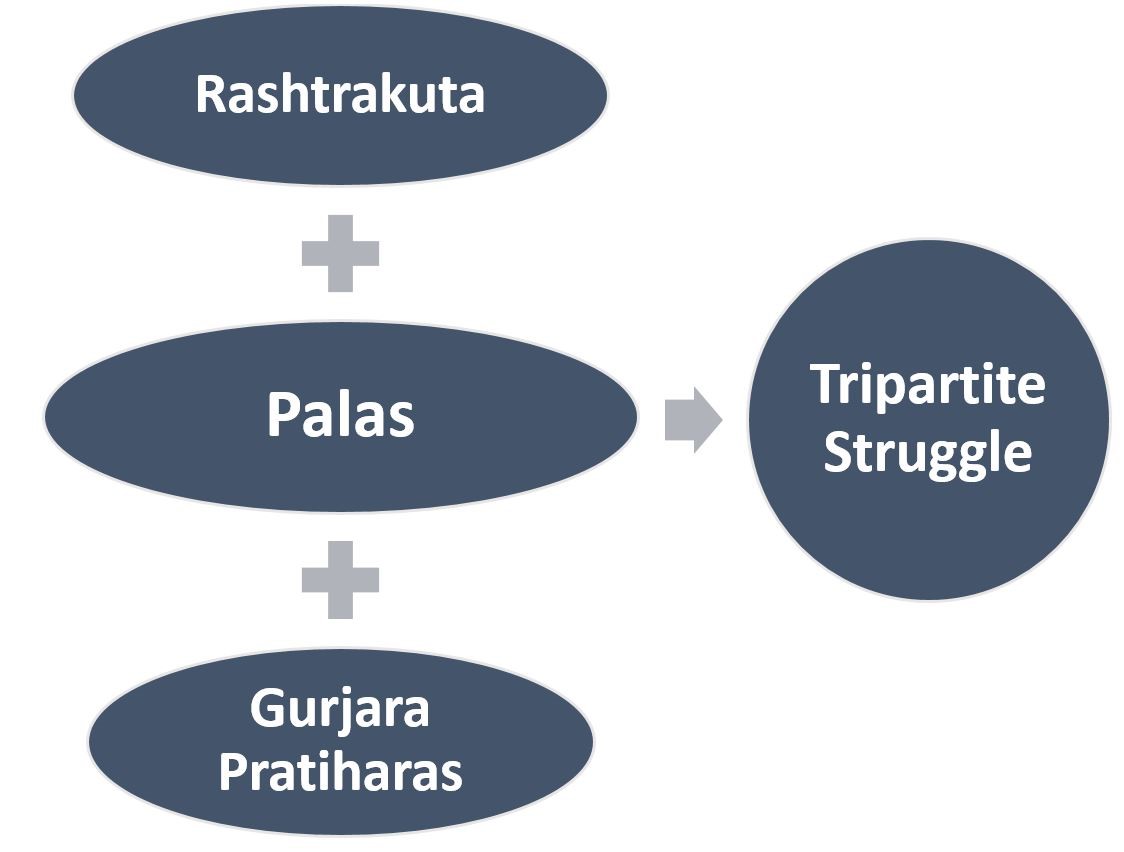 Vijayalaya was the founder of the Chola dynasty.

Chola empire was extended between river Tungabhadra in the north to Kanyakumari in the south. Chola Kings use their Navy for their foreign expedition. They conquered parts of the Maldives and Sri Lanka.

Rajaraja I and his son Rajendra I were the real architects of this dynasty. Rajaraja I is famous for constructing a famous temple known as Rajarajeshwara or Brihadesvara temple located at Tanjore. It is dedicated to Lord Shiva. He built a dam across Kaveri river.

Rajendra I defeated Mahipala I and assumed the title of “Gangai-konda” (conqueror of Ganga) and also founded a new capital called ‘Gangaikondacholapuram’.

Rajendra Chola III was the last Chola ruler. Under his tenure, the empire started disintegrating into smaller regions.

Local self-government was the basic feature of the Chola administration.

The Chola empire was divided into mandalams or provinces. These were further divided into valandu and nadu. Under nadu, there were many autonomous villages. Two types of villages were there- Ur (people from different caste and assembly) and Agrahara (settled by Brahmins). Town was called nagram.

The cholas undertook land surveys and revenue settlement to assess taxes. Kuli, Ma, Patti, Veli and Padagam were some units of land measurement.

Trade and commerce were in the flourished state during the Chola empire.

Cholas were ardent followers of Shaivism. Devadasi system came into practice during this period.

After Harsha’s death (647 A.D.) and disintegration of Pratihara empire many Rajput states emerged in Rajasthan and Indus plain. The Gahadvalas of Kannuj, Parmars of Malwa, and Chauhan of Ajmer were the prominent Rajput rulers.

Each Rajput state was ruled by a ruler with the help of his chiefs who were generally his blood brothers.

The political system of the Rajputs was bureaucratic-cum-feudal in character. 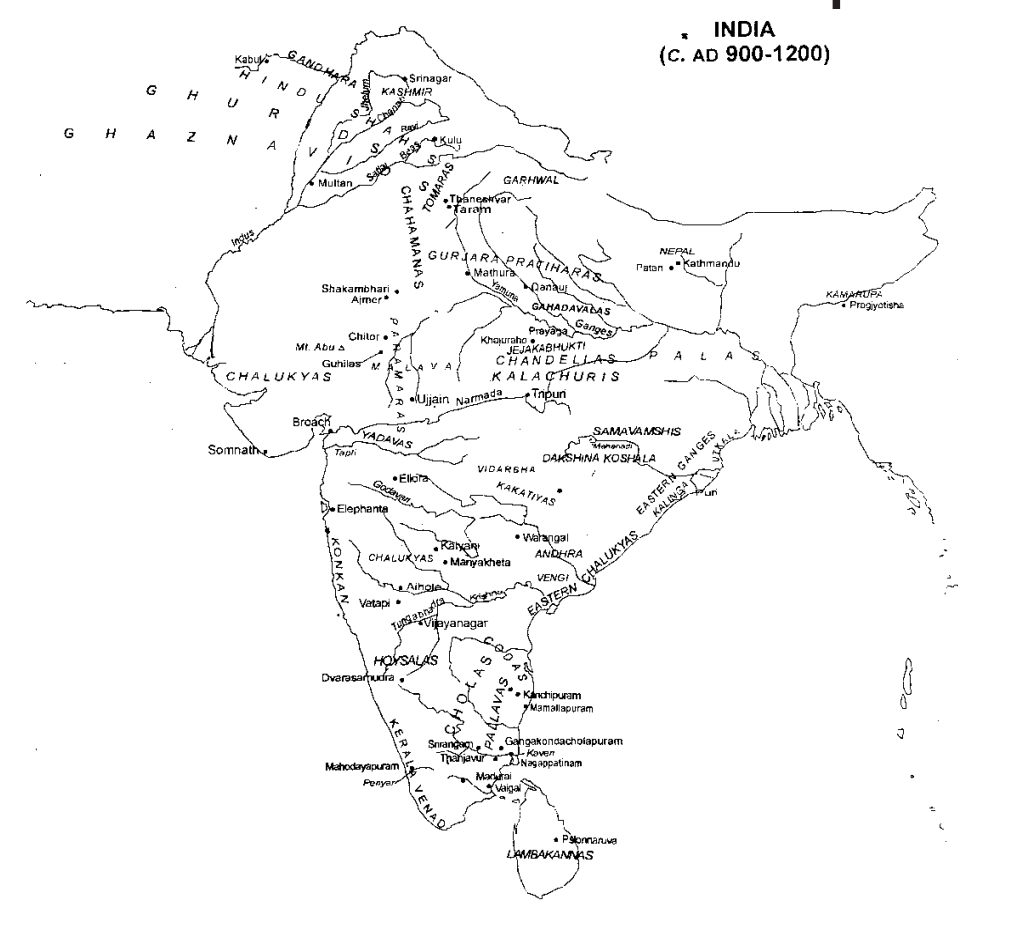 1.4. Other Important rulers of North and South India

Many social and economic changes were seen during the early medieval period. New groups were added to Brahmanical society.

New areas were brought under cultivation and land grants have increased. The land grant helped in the emergence of the Kayastha class.

The economic condition in the first phase (AD 750–AD 1000) was on the decline as evident from the absence of coins for exchange and the condition of towns of north India.

The economic condition in the second phase revived after 1000 AD. New gold coins were found and towns were in a good state. The revival seems to be due to an increase in agricultural activities and the emergence of Arab traders as important players in international sea trade.

The emergence of a power of a class of people who were called Samanta, Ranak, Rautta, etc, can be easily seen during this period. They were either government officers or defeated ruler and their supporters.

The caste system was prominent in society. Most of the workers as well as tribals were considered untouchables. The Brahmanas enjoyed superiority in the caste system.

The ministers and the officials assumed high-sounding titles as mahasamantadhipati.

Hinduism was expanding rapidly and society has become more complex due to more sub-castes.

The marriage age was lowered and the education of women was in a poor state. The condition of women has degraded during this period.

Remarriage was allowed under certain conditions and widows has the Right to property.

The rate of the revenue from peasants was one-sixth of the produce. There were a number of additional cesses such as grazing tax, tax on ponds, etc.

The revenue assignment granted by the ruler to his officer was known as bhoga. They were temporary in nature.

The hereditary chiefs not only assess land revenue but also give punishment and impose fines.

Trade between South India and south-East Asia flourished during this period. The merchants were organized in guilds.

The main port for sailing to Java, Sumatra was tamralipti in Bengal.

5. Religious movement during the period

This period is marked as a revival of Hinduism and the decline of Buddhism and Jainism.

Many internal changes occurred in Buddhism during this period.

Jainism continued to be popular among the trader’s community. The Ganga rulers of Karnataka were patrons of Jainism.

In Hinduism, Shiva and Vishnu became the chief gods. Bhakti movement in south India started during this period.

Alwars/ Alvars were devotees of Vishnu during the 6th -9th century.

Nayanars were a group of saints living in Tamil Nadu during the 3rd to 8th centuries CE. They were devotees of Shiva.

Another famous movement was Lingayat or Vir Saiva movement. They were worshippers of Shiva.

Sankara proposed Advaitavada or the doctrine of non-dualism philosophy in the 9th century.

Who were the participants of the Tripartite Struggle?

Tripartite Struggle was an armed conflict between Palas of East, Gurjara Pratiharas of North and Rashtrakutas of South India.

Who was the founder of Pala dynasty?

Pala dynasty was founded by Gopala.

Which dynasty was founded by Dantidurga?

Dantidurga was the founder of the Rashtrakuta dynasty.

Who built the famous Kailasha temple at Ellora?

Krishna I had built the famous Kailasha temple at Ellora.

Rajaraja I and Rajendra I were the real architects of which dynasty?

Rajaraja I and Rajendra I were the real architects of Chola dynasty.

What was the basic feature of Chola administration?

Local self-government was the basic feature of Chola administration.

In which battle did Muhammad Ghori defeat and kill Prithviraj Chauhan?

In 1192, Muhammad Ghori has defeated and killed Prithviraj in the second Battle of Tarain.

What was the rate of the revenue from peasant during this period?

The rate of the revenue from peasant was one sixth of the produce.

Who proposed the Advaitavada or doctrine of non-dualism philosophy?

Sankara proposed Advaitavada or doctrine of non-dualism philosophy in the 9th century.

Pulakesin II defeated Harshavardhana on the banks of River Narmada in 618 AD.

Who is the author of Harshacharita?

Banabhatta was a poet in Harsha’s court and he wrote ‘Harshacharita’ a biography of Harshavardhana in Sanskrit language.