One of the indirect sources to know more about the Interior of Earth is seismic activity. The study of seismic waves provides complete information regarding the structure of layers of the earth’s interior. In this article, we have discussed about what is an earthquake, causes of earthquake, measurement of seismic activity, types of waves, shadow zone of P waves and S waves and effects of earthquake. This will help you in understanding the next article Internal Structure of Earth.

1. What is an Earthquake?

The shaking of the Earth's surface is called an earthquake. The sudden release of energy into the Earth's lithosphere creates seismic waves, which eventually come to us in the form of vibration. Sometimes the intensity of an earthquake is so weak that it cannot be felt and sometimes it is so severe that there is devastation like 2001 earthquake in Kutch, Gujarat and 2015 earthquake in Nepal.

Epicentre: The point on the Earth’s surface above where the earthquake originated is called epicenter. It is directly above focus. It is the first to experience the waves.

Focus/ Hypocentre: It is the point where energy is released.

Earthquake is measured either in magnitude or intensity of shock.

Ritcher Scale measures the magnitude which refers to the energy released during the earthquake. It is expressed in numbers from 0-10.

Mercalli Scale measures the intensity which takes into account the visible damage caused by the Earthquake. Its range varies from 1-12.

Seismograph is an instrument that records the seismic waves reaching the surface.

Earthquakes are caused by the energy released through seismic waves. These waves are generally of two types- Body waves and Surface Waves. The velocity of waves changes when they travel through materials having different densities (Denser the material, higher is the velocity).

Body waves are generated when the energy is released at focus. These move in all directions through the earth.

The body waves are further classified as:

These waves are also known as primary waves. These are the first waves to reach surface. These waves are like sound waves. They travel through all three mediums - solid, liquid and gas. These waves have a tendency to vibrate parallel to the direction of wave propagation. 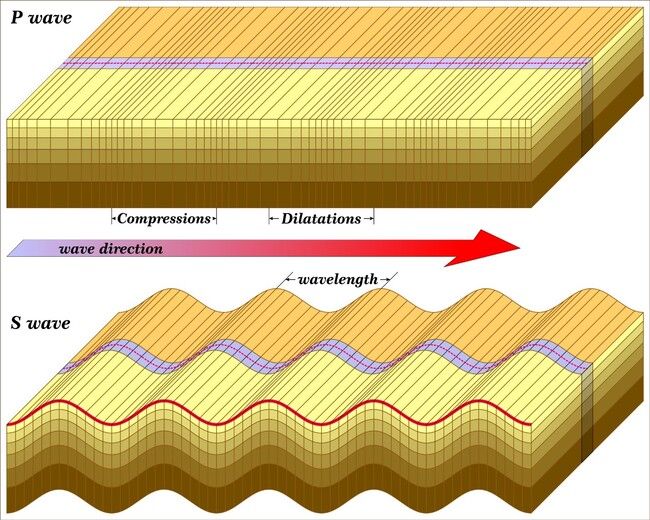 S-waves appear sometime after the P-waves and are called secondary waves. An important feature of these S waves is that they travel only through a solid medium. The vibrational direction of this S wave is perpendicular to the direction of wave propagation, forming crusts and troughs in the direction of their transmission. 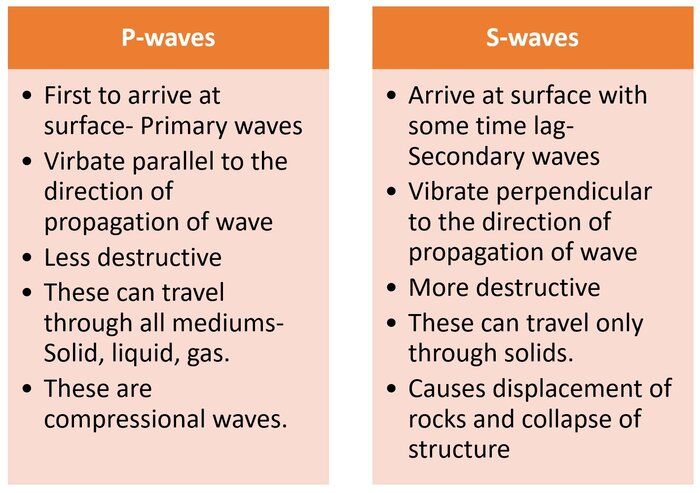 The Surface waves can also be divided into two types:

Also called Love waves. These waves cause horizontal shifting of the earth. These move faster than R waves but slower than body waves. These are confined to the surface of the crust.

Also known as Rayleigh waves. These follow an elliptical motion. These cause ground to shake in an elliptical pattern. It includes both longitudinal and transverse motions that fades out exponentially with increasing distance from the surface.

Shadow Zone is the area of ​​the Earth that does not record any kind of waves. For both P and S waves, a zone between 105° to 145° is a shadow zone. The zone beyond 105° does not record S-waves. The shadow zone of P waves is smaller than that of S-waves. 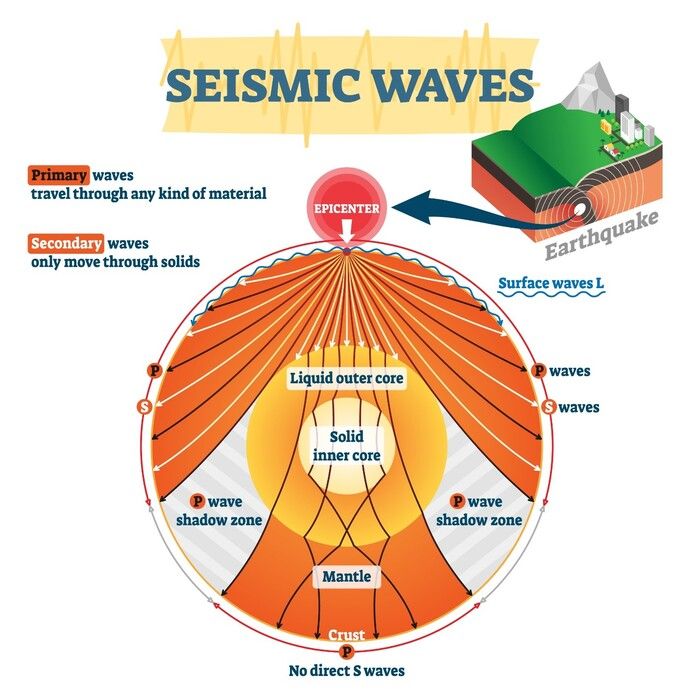 The various types of earthquakes are listed below:

Earthquake is a natural disaster that has immediate effects. The hazardous effects of the earthquake are listed below:

The Ring of Fire zone i.e. the Circum Pacific Belt is the zone of earthquake that surrounds the pacific ocean. About 90% of the earthquakes in the world occur in the belt. Alpide Belt that extends from Mediterranean region towards Turkey, Iran and India is the second most seismic region in the world.

Need to Know Facts about Earthquake

What are the causes of Earthquake?

Which scale is used to measure the magnitude of Earthquake?

Ritcher Scale is used to measure the magnitude of Earthquake.

Whose shadow zone is larger- P waves or S waves?

Which waves are the first to arrive at surface?

P waves or Primary waves are the first one to arrive at the surface.

What do P waves travel through?

P waves can travel through all mediums- Solid, liquid and gas.