Preamble of the Indian Constitution | Meaning of Terms used in Preamble 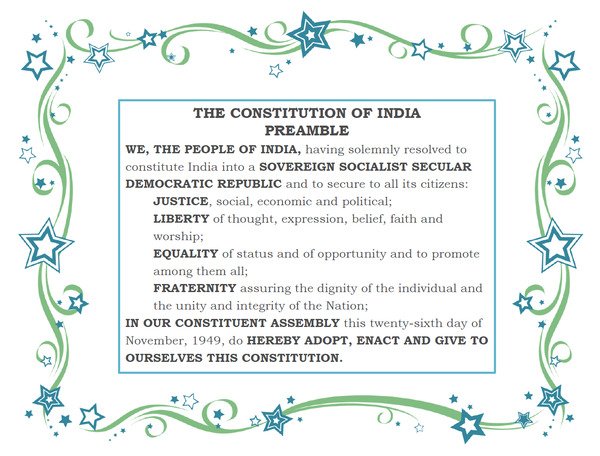 Key highlights of the Preamble:

Some important facts related to the Preamble of the Indian Constitution:

Meaning of keywords used in the Preamble:

Sovereign means the independent power of a state. In other words, a sovereign state is not subject to the control of any other state or external power, and that state has the power to legislate on any subject.

It was added to the Preamble by the 42nd Amendment in 1976. Though the word socialist was not part of the Preamble, the Constitution contained socialistic principles as part of Directive Principles of State Policy in the Constitution. Socialism in India is democratic socialism. India has a mixed economy with the coexistence of both private and public sectors.

It was also added into the Preamble by the 42nd Amendment in 1976. Secular means that relations between government and religious groups are determined according to the Constitution and the law. Secularism separates the power of state and religion. In Indian secularism, all religions receive the same support from the state.

The term democratic means that the Constitution of India provides for a form of government that derives its authority from the will of the people expressed in an election.

The Constitution provides for social, economic, and political justice to ensure equality among its citizens.

Social justice means the absence of privileges to certain sections in society. It means that no discrimination shall be made against any citizen on the basis of caste, creed, color, religion, sex or place of birth.

Economic justice means that there is no discrimination between people on the basis of income, wealth and economic status.

The ideal of liberty means that rules do not limit or control the activities of individuals. The Preamble gives five different types of liberty. They are liberty of thought, expression, belief, faith, and worship.

The word means a feeling of brotherhood and an emotional attachment to the country and all people. Fraternity helps to promote dignity and unity in the nation.