The first indigenously-developed RT-PCR kit for testing monkeypox has been launched at the Andhra Pradesh Medtech Zone (AMTZ). The kit has been developed by Transasia Bio-Medicals.

Monkeypox (MPX) is a viral zoonotic disease in which the symptoms are similar to smallpox. Although the disease is clinically less severe. It is caused by the monkeypox virus which is a member of the Orthopoxvirus genus in the family Poxviridae.

The disease is called monkeypox as it was first found in colonies of monkeys in 1958 and was later found in humans in 1970.

According to WHO reports, the majority of cases were reported from the European regions and others including Africa and America among the five WHO Regions. The case fatality ratio has been around 3–6%.

How does Monkeypox get transmitted?

The disease can transfer from animal to human through direct contact with the blood, bodily fluids, or cutaneous or mucosal lesions of infected animals. It can also be transmitted to humans through a person or animal who is infected by the virus and also spread through material contaminated it.

Close contact with respiratory secretions, skin lesions of an infected person or recently contaminated objects can cause human-to-human transmission. It is also possible to become infected from breathing in skin flakes or viruses from clothing, bedding or towels. This is known as fomite transmission.

In short, monkeypox can spread through:

What are the symptoms of Monkeypox?

The symptoms of the virus usually show from 6 to 13 days but can range from 5 to 21 days. Some of the symptoms are: 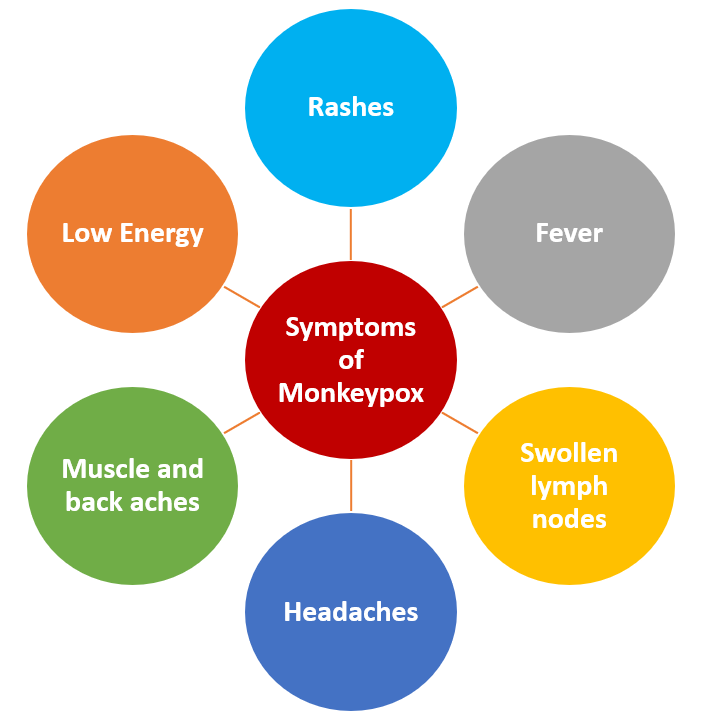 How can we prevent Monkeypox?

How can you recover from Monkeypox at home?

Is there any vaccine to prevent monkeypox?

According to WHO, a smallpox vaccine was recently approved which may also be useful for monkeypox. Only people who are at risk should opt for vaccination. WHO does not recommend mass vaccination at this time.

How can the virus be diagnosed?

As per WHO, detection of viral DNA by polymerase chain reaction (PCR) is the preferred laboratory test for monkeypox.