Banking, Financial and Economic Awareness of 05 and 06 April 2020

1. As per recent order of Environment ministry, bidder, who succeeds in a bid of a mining lease, will get legally acceptable environmental clearance from the previous holder of the lease for a period of

2. How much money was given to PM CARES Fund by Life Insurance Corporation (LIC)?

3. During March 20 to March 27, India’s foreign currency assets have increased by

4. As per government‘s recent order, e-way bills with validity between March 20 and April 15 will remain valid till

5. Which of the following is/are not included in the definition of the term narrow money? 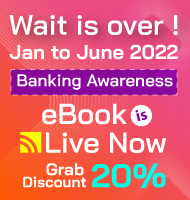