Who was Bhagwan Swaminarayan?

Sahajanand Swami is the founder of the Swaminarayan sect. His devotees considered him an incarnation of God and called him by the name Bhagwan Swaminarayan. He was born on 3 April 1781 in a Brahmin family in Chhapaiya village in the Gonda district of Uttar Pradesh. He was named Ghanshyam by his parents. It is said that he had a symbolic icon of Padma on his hand, a thunderbolt and a lotus symbol on his feet. He died on 1 June 1830.

He had left home at the age of 11 years after his parents died. He travelled across the country and was named Neelkanthvarni. He learned Ashtanga Yoga from Gopalyogi. After a journey of seven years, he finally ended up in Loj, a village in Gujarat where he met Muktananda Swami who was a senior disciple of Ramananda Swami. He received the initiation of Sanyas from Ramananda Swami in 1800 and came to be known as Swami Sahajanand. 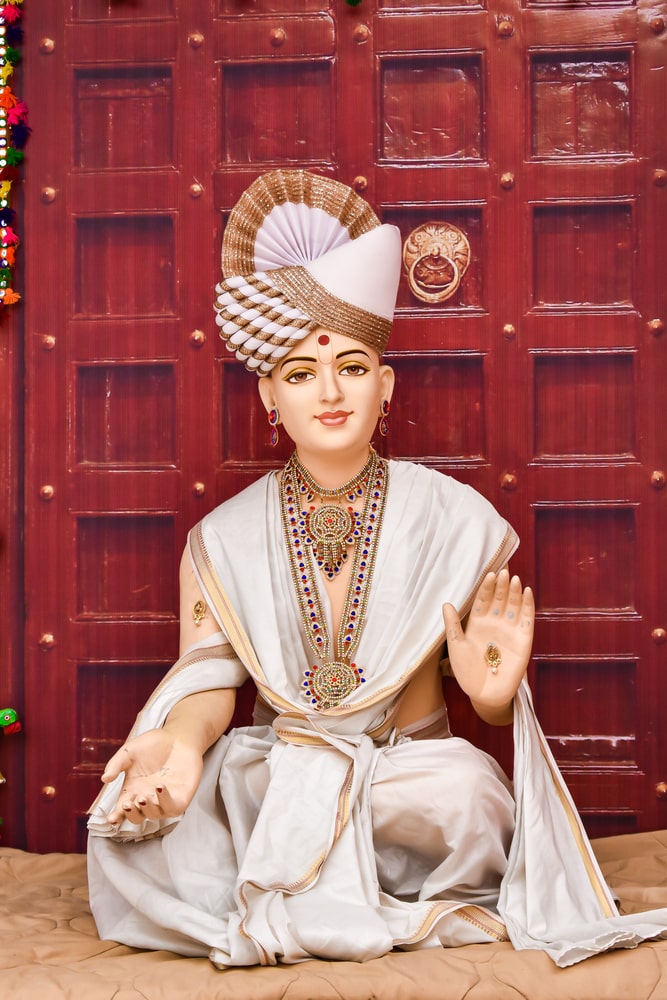 Swaminarayan Sect: Ramananda Swami appointed Swami Sahajanand as the leader of the Uddhav sect which became the Swaminarayan Sect. The sect belongs to the Vaishnav tradition. It focuses on salvation through total devotion (bhakti) to Supreme God developed through righteousness, knowledge and detachment (dharma, jnan and vairagya). Sahajanand came to be known as Swaminarayan after the death of Ramanand Swami.

Philosophy and Teachings of Swaminarayan

His philosophy, known as Navya Vishishtadvaita (Neo-qualified non-dualism), upholds the existence of the five eternal realities, namely: Jiva, Ishwar, Maya, Brahman and Parabrahman. To attain Moksha (Atyantik Mukti), the Jiva has to develop Atmanishtha - the knowledge that he is not the body, but Atma as Jiva is bound by avidya-karma (Maya) that needs to be eliminated. But this type of Atmanishtha is not enough. A higher (vishesh) Atmanishtha needs to be realised - in which the Atma identifies itself with Aksharbrahman to become Akshar-rup - like Akshar (for which one has to associate with Satpurush-the manifest form of Aksharbrahman). This is known as true Jnan and true Atmanishtha.

The liberated soul, Akshar Mukta, then becomes eligible to worship Parabrahman - the Lord Purushottam. 'Attaining' Parabrahman does not mean merging in Him; the individuality of the sevak - the Mukta always remains.

He said that the goal of Human Life is that One should identify one's Atma, beyond the three bodies (gross, subtle and causal), with Brahman (Aksharbrahman) and offer worship to Parabrahman.

In 1882, the first Swaminarayan Temple was built in Ahmedabad. There are many temples of the Swaminarayan sect in the world including Akshardham Temple in Delhi.

What is Bhagwan Swaminarayan Philosophy known as?

What was the real name of Bhagwan Swaminarayan?

The parents of Bhagwan Swaminarayan named him Ghanshyam.

When was Bhagwan Swaminarayan born?

Bhagwan Swaminarayan was born in a Brahmin family on 3 April 1781.

The First Swaminarayan Temple is built in which city?

First Swaminarayan Temple was built in 1882 in Ahmedabad, Gujarat.

What were the five vows that Bhagwan Swaminarayan asked his disciples to take?