If in a certain language ‘WATCHERS’ is coded as ‘KMHOSQFE’, then ‘DEVIL’ will be the code for?

The logic for the above code can be explained as

Similarly, ‘DEVIL’ will be the code for 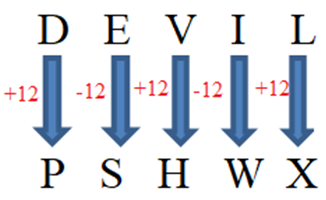