Direction:  In the question, two statements are given, followed by two conclusions, I and II. Considering the statements to be true even if they seem to be in variance from the commonly known facts, you have to decide which of the following conclusion(s) follow the given statements.

1. Some books are novels.

2. Some novels are short stories.

3. All short stories are good.

Correct Answer : d ) Neither conclusion I nor II follows 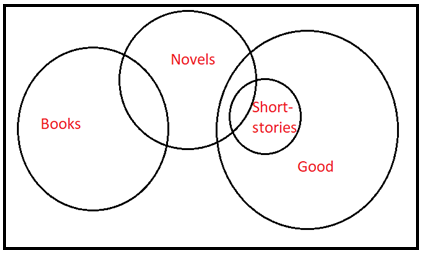 From the above Venn diagram, we can say that conclusion I does not follow the given statements as some ‘novels’ are ‘short stories’ and all ‘short stories’ are inclusive of good, so some ‘goods’ are always ‘novels’.

From the above Venn diagram, we can say that conclusion II is possible but not definite, so conclusion II does not follow the given statements.

If you describe someone as audacious, it means they can take risks in order to achieve something.

Original and without prior restrictions to old ideas.

Marked by originality and boldness.

"He has shown an audacious future of our city."