Below are the two statements followed by two conclusions I and II. You have to take the given statements to be true even if they seem to be at variance with the commonly known facts and pick which of the conclusion(s) follow/s the statements?

Some Coffee are drinks.

All liquids are drinks although some of them are coffee.

I. At least one coffee is liquid and drink both.

II. Some drinks which are not coffee are liquid.

Correct Answer : a ) Only I follows

Given statements can be depicted by the following possible case 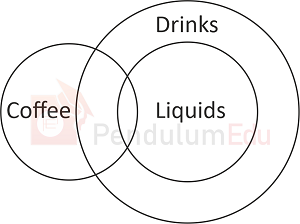 Therefore, from the above venn diagram we can say that,

As, there is a common region between coffee and liquid, which can be only inside the drinks so, conclusion I follows the statement.

While, as there is a region outside liquid which comprises drinks but not coffee so conclusion II does not follow the given statement.