QOTD-GK-What was the real name of Swami Vivekananda? 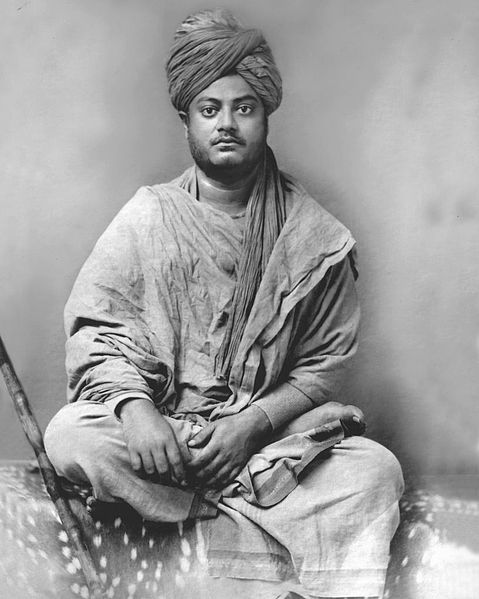 Swami Vivekananda was born on 12th January 1863 in Calcutta, and his real name was Narendranath Datta. He was the founder of Ramakrishna Mission and Ramakrishna Math. He was one of the great pioneers in the revival of Hinduism in India. He believed that service to mankind is service to God.

He also introduced the Indian philosophies of Vedanta and Yoga to the western nations. He contemplated that every man can become great by doing good to others, being patient, and working hard, thereby making every nation great.

He emphasized that education should not focus on rote learning; rather, it should help in character- building and in inducing self- confidence and self- respect among the students.

He advocated Universalism and said that one must not only tolerate other religions but positively embrace them.

He is remembered for his famous speech at the Parliament of the World’s Religions in Chicago, which started with the lines – “Sisters and Brothers of America.”  Some of his notable works are- Raja Yoga, Karma Yoga, Bhakti Yoga, Lectures from Colombo to Almora, etc.

Today is the 117th death anniversary of Swami Vivekananda as he died on 4 July 1902 while meditating in Belur Math.

Option B is the correct answer.

The question related to great personalities is asked in various government exams like UPSC, State PCS, SSC CGL, SSC MTS, SSC JE, RRB JE, CLAT, etc. The students preparing for these exams should try our free mock tests at PendulumEdu to cover this portion of the syllabus.