The Banking sector of India is ranked 6th in the world. House to a number of the private sector and public sector banks, India’s banking sector is sufficiently capitalized and well- regulated as per the Reserve Bank of India. Market, credit, and liquidity studies indicate that the Indian Banks are well prepared to withstand any global crisis.

With a variety of banks to choose from, a customer may be confused as to which one is better and well suited to the needs. So, to help ease the confusion, here is a list of the Top 10 Banks in India.

An analysis has been drawn based on their origin, market capitalization as on 02nd April 2019, number of employees, number of branches, and ATMs.

The Top 10 banks in India have been ranked based on their total assets as on 03rd July 2019. The following graph shows a comparative study. 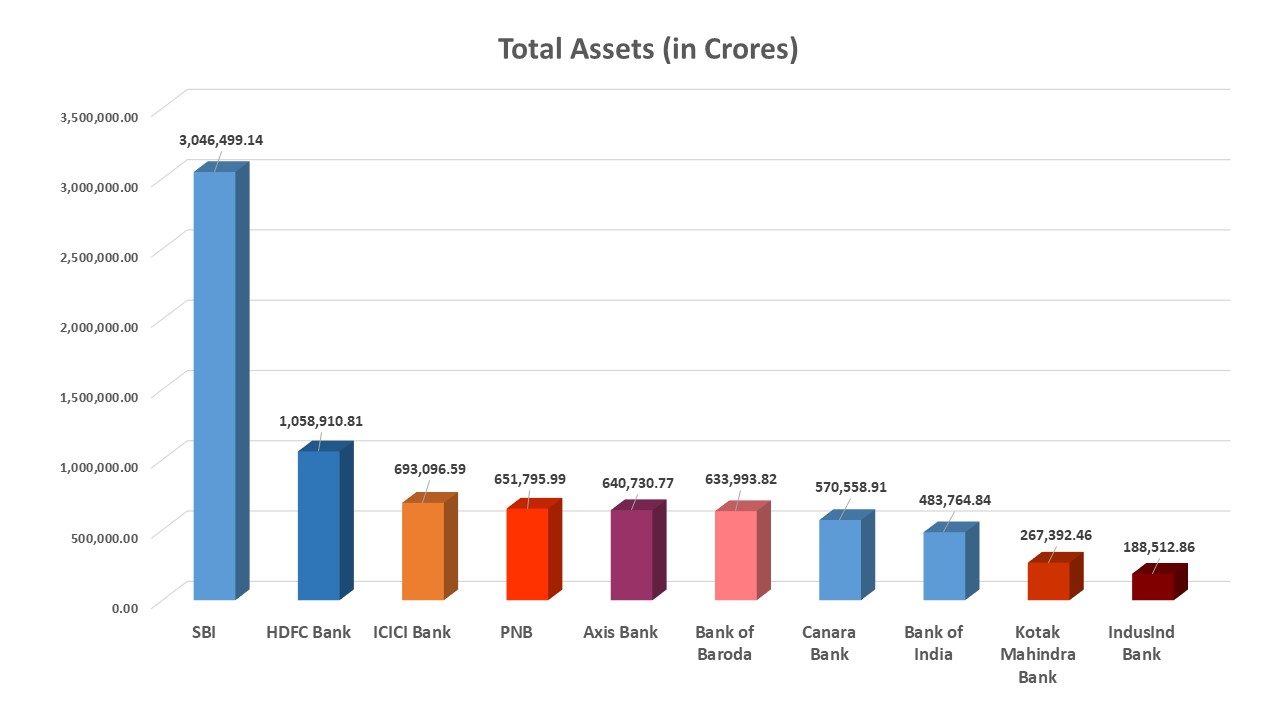 The oldest of the Indian Banking Sector, SBI is also the largest bank in India and now a fortune 500 company. Its origin dates back to 02nd June 1806, when the Bank of Calcutta was established, which was later chartered as Bank of Bengal, in 1809. The Bank of Bombay established in 1840, and The Bank of Madras established in 1843. The union of these three banks happened in 1921 and named as the Imperial Bank.

The head office of the Bank is located in Mumbai. The bank has 14 Local Head Offices and 57 Zonal Offices located at important cities throughout the country.

Exams to get a job in SBI- SBI PO, SBI CLERK, SBI SO

One of the firsts to receive an 'in principle' approval from the Reserve Bank of India (RBI) to set up a bank in the private sector, The Housing Development Finance Corporation Limited (HDFC) was incorporated in August 1994 as HDFC Bank Limited, as part of RBI's liberalisation of the Indian Banking Industry. It started its operations as a Scheduled Commercial Bank in January 1995.

Exams to get a job in HDFC Bank- This is a private bank, they release vacancies from time-to-time.

ICICI Limited was instituted at the initiative of the World Bank, the Government of India and representatives of Indian industry in 1955. The principal objective was to design a financial institution to provide medium-term and long-term project financing to Indian businesses. ICICI Bank was founded as a wholly-owned subsidiary of the ICICI Limited in 1994.

As of 02nd April 2019, ICICI bank has a market capitalization of Rs. 2,56,205.53 crore. It is headquartered in Mumbai, Maharashtra, with its registered office in Vadodara, Gujarat. The bank has more than 4867 branches and 14367 ATMs across India, with its presence in 16 countries outside India.

Exams to get a job in ICICI Bank- This is a private bank, they release vacancies from time-to-time.

The PNB was instituted on 19th May 1894 and started operations on 12th April 1895, with Sh. Dayal Singh Majithia as the first Chairman, Lala Harkishan Lal, the first secretary to the Board and Shri Bulaki Ram Shastri Barrister at Lahore, as the Manager. The bank boasts of having served, eminent freedom fighters of India. PND, along with 13 other banks, was nationalized in July 1969.

Being one of the oldest banks of India, Punjab National Bank, carries the pride of having more than 80 million customers, 7,000 branches, and 9255 ATMs. Headquartered in New Delhi, it has a market capitalization of Rs. 37,411.52 crores (as on 02nd April 2019), making it one of the major banks in India.

Exams to get a job in PNB- IBPS PO, IBPS CLERK, IBPS SO, PNB Technical Officer 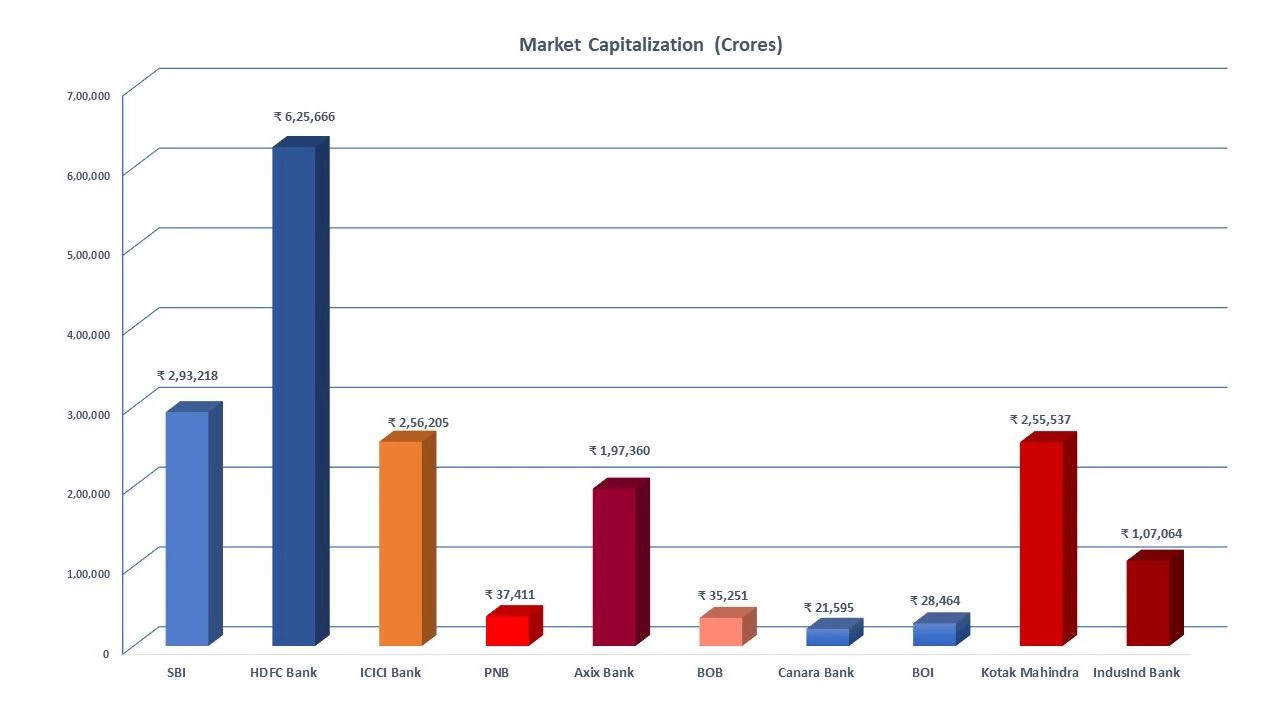 The bank has its headquarters in Mumbai, with 4,050 branches and 11,801 ATMs and nine overseas offices. Axis Bank holds a market capitalization of Rs.1,97,360.89 crores as reported before the beginning of the fiscal year 2019-20.

Exams to get a job in Axis Bank- This is a private bank, they release vacancies from time-to-time.

One of the first banks in the 20th Century, the Bank of Baroda was founded by The Maharaja of Baroda, Maharaja Sayajirao Gaekwad III on 20th July 1908. The bank was nationalised in July 1969, along with 13 other banks.

Bank of Baroda, was officially merged with Dena Bank and Vijaya Bank on 01st April 2019, making it the first-ever bank in India engaged in a three-way merger. The bank has its headquarters in Vadodara, Gujarat and has 12 crores customers, 9,500 branches, 13,400 ATMs pan India. The bank reposted a market capitalization of Rs. 35,251.50 crores on 02nd April 2019.

Exams to get a job in Bank of Baroda- IBPS PO, IBPS Clerk, IBPS SO, BoB SO, BoB PO

Founded in 1906, by late Shri Ammembal Subba Rao Pai as 'Canara Bank Hindu Permanent Fund,' Canara Bank became a limited company in 1910 and came to be known as Canara Bank after its nationalisation in July 1969.

Founded on 07th September 1906, by a group of eminent businessmen from Mumbai, The Bank of India was under private ownership and control until July 1969, when it was nationalized.

The bank has its headquarters in Mumbai, with 5100 branches across India and 56 offices located abroad. As on 02nd April 2019, the bank has a market capitalization of Rs. 28,464.06 crores. The Bank of India is one of the founding members of the Society for Worldwide Interbank Financial Telecommunication (SWIFT).

Exams to get a job in Bank of India- IBPS PO, IBPS Clerk, IBPS SO

Exams to get a job in Kotak Mahindra Bank- This is a private bank, they release vacancies from time-to-time. 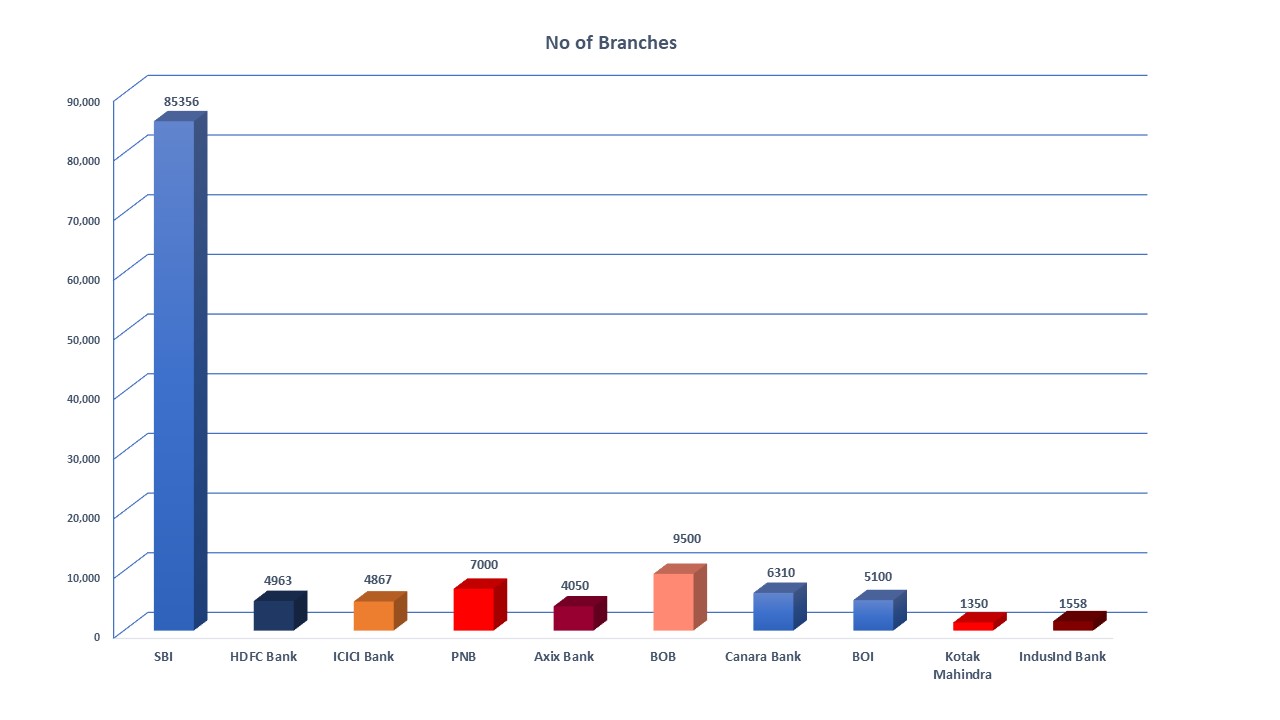 The banking sector of India has evolved with time, and now in the 21st century, technology has also come into India’s Banking Sector. It is one of the most secure and well-paying sectors in terms of employment. To get a job in any of the prestigious banks of India, several banking exams take place around the year. Aspirants should practice well and try mock tests to self-evaluate and assess the improvement areas and work on them.

PendulumEdu can help you in preparation for banking exams like IBPS PO, IBPS SO, IBPS CLERK, SBI PO, SBI SO, SBI CLERK, IBPS RRB, INDUSIND PO, INDUSIND SO, INDUSIND CLERK and many other banking exams. If there is some specific doubt, you can ask and clear your concepts before the exam by using PendulumEdu’s One-To-One Session.