QOTD-GK-Which of the following Indian city has been recently included in the UNESCO World Heritage Site?

The Pink City Jaipur, Rajasthan has been included in the UNESCO World Heritage List on 6 July 2019. With this addition, India gets its 38 sites recognized under the World Heritage site list (30 Cultural, 7 Natural and 1 mixed site). It is also the second city in India after Ahmedabad to be included in this list. 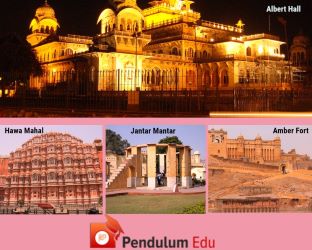 Jaipur is the second-largest city of Rajasthan and is known for its iconic places like Hawa Mahal, Jantar Mantar, Govind Dev temple, City Palace, etc. which are the examples of great artistic and architectural work of the craftsmen of those times. Jantar Mantar and Amber Fort are already present in the world heritage site list. Also, the town planning of the city is remarkable.

The World Heritage Site is selected after the nominated site apart from being of outstanding and universal value should fulfill any of the ten criteria mentioned by UNESCO.  This tag provides legal protection to these sites under the Geneva Convention and other treaties like The Hague Convention for the Protection of Cultural Property in the Event of Armed Conflict.

The news related to Art and Culture invite questions in the Current Affairs section of various exams like UPSC CSE, UPSC CDS, State PSC, SSC CGL, SSC CHSL, RRB NTPC, etc. To cover this section and practice such questions, one can attempt our free mock test at PendulumEdu.