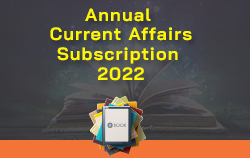 2. Decline in Maternal Mortality Rate (MMR) in India by 8 points in one year

4. External Affairs Minister on a 3-day visit to the Netherlands

1. Which of the following countries will be hosting the 2023 Men’s Hockey World Cup?

2. An exhibition titled “Janamsakhi”, recently organized in New Delhi was dedicated to which of the following saints?

3. Which of the following countries hosted 2019 ‘No Money for Terror’ Conference?

4. ‘Tiger Triumph’ is a tri-services exercise between which of the following two nations?

a. India and China

b. India and Russia