1. Lockdown period has been extended to 30 April 2020 in Tamil Nadu, Puducherry, Mizoram, Meghalaya and Arunachal Pradesh

2. Regular visa and e-visa deadlines for foreign nationals stranded in India were extended

4. A collaborative network ‘CollabCAD’ was launched

5. Chief Election Commissioner and others will contribute 30% of their basic salary against COVID-19 for one year

Topic of the Day- “Earthquake”

The shaking of the Earth's surface is called earthquake. The sudden release of energy into the Earth's lithosphere creates seismic waves, which eventually come to us in the form of Earth vibrations. Sometimes the intensity of an earthquake is so weak that it cannot even be felt and sometimes it is so severe that there is a devastation like 2001 earthquake in Kutch, Gujarat and 2015 earthquake in Nepal.

Earthquakes are caused by the energy released through seismic waves. These waves are generally of two types- Body waves and Surface Waves. The body waves are further classified as:

S-Waves - S waves come sometime after the earthquake and are called secondary waves. An important feature of these S waves is that they travel only through a solid medium. The vibrational direction of this S wave is perpendicular to the direction of wave propagation, forming crusts and troughs in the direction of their transmission.

The body waves interact with surface rocks thereby, generating surface waves which moves along the surface. These can also be divided into two parts -

Shadow zone, the area of ​​the Earth that does not record any kind of waves. For both P and S waves, a zone between 105° to 145° is a shadow zone. The zone beyond 105° does not record S-waves. The shadow zone of P waves is smaller than that of S-waves. 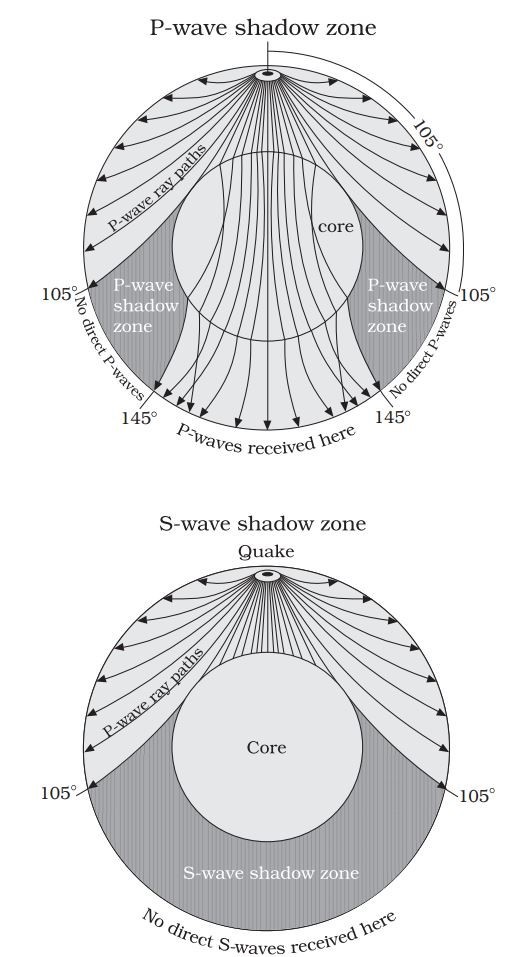 1. Aizawl is the capital of which northeast state?

2. The time limit for regular visas and e-visas of foreign nationals stranded in India has been extended to what date?

3. Which statement is correct with respect to Dr. Bhim Rao Ambedkar?

A. He was born in Madhya Pradesh.

B. He was the first Law and Justice Minister of independent India.

C. He has been awarded the Bharat Ratna.

D. All of the above are correct.

4. A Collaboration network CollabCAD has been launched under which of the following?

D. Joint effort of the above three

5. Which part of Indian Constitution is related to Election and Election Commission?

6. In which state is Pahela Baishakh celebrated?

7. Recently MB Desai passed away, he was related to which field?

Verb: To talk long.; To talk excessively.; To babble.; To talk foolishly.

Noun: The act of operating.; An act of empty talk.

"My siblings prated on until I was ready to scold them."