It was constituted under the Companies Act, 2013.

It hears the appeals against the orders of the National Company Law Tribunal (NCLT) and orders passed by the Competition Commission of India (CCI).

It also hears the appeals against the orders issued by the Insolvency and Bankruptcy Board of India. 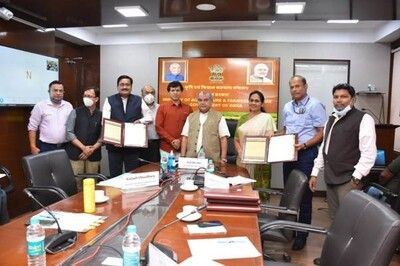 Unified Payments Interface (UPI) was launched in 2016. It is an instant real-time payment system for transfer money in bank accounts.

7. India and UK will start negotiation on FTA by November 2021.

It is a group of England, Scotland, Wales, and Northern Ireland nations.

It is located in northwestern Europe.

Its capital is London and the currency is the Pound sterling.

He played a crucial role in dams, reservoirs, and hydro-power projects of India. He was the Chief Engineer for the Krishna Raja Sagar dam project located in Karnataka.

He was one among the committee members who had planned the Indian Economy in 1934.

He was conferred the Bharat Ratna award in 1955. He also received the title of Knight Commander from the British Government.

He designed the automatic barrier water floodgates of the Khadakvasla reservoir.

9. India to hold the India-Africa Defence Dialogue in March 2022.

Raja Mahendra Pratap Singh proclaimed the first Provisional Government of India outside India at the historic Bagh-e-Babur in Kabul on December 1, 1915.

He declared himself President and Maulana Barkatullah of Bhopal as Prime Minister of the Provisional Government of India.

This government served as the Indian Government in exile during World War I from Kabul in 1915.

He launched the World Federation in Berlin in 1929. He was nominated for the 1932 Nobel Peace Prize by the Swedish doctor N A Nilsson.

In the nomination, Raja Mahendra Pratap Singh was described as a “Hindu patriot”, “editor of the World Federation”, and “unofficial envoy of Afghanistan”.

During the Second World War, he formed the Executive Board of India in Japan in 1940. He is commonly known as "Aryan Peshwa".

'My Life Story' is the autobiography of Raja Mahendra Pratap Singh. Dr. Vir Singh is the editor of this autobiography.

It is one of the world’s largest finance providers aiming to end extreme poverty and promote shared growth.

It was established in 1944 and is headquartered in Washington, DC, USA. Currently, it has 189 members.

Agnikul Cosmos is Chennai-based startup. It has last year signed a non-disclosure agreement to test its small rocket that can launch 100 kg satellites into low earth orbit. A formal agreement is likely to be signed soon.